Exeter ear wax removal service is offered by the Honiton Hearing Centre, a family owned and run centre with Colin and Sam Eaton at the controls. Colin has a wealth of experience with hearing and ear wax removal, along with fitting hearing aids. Based in east Devon the Honiton hearing centre is local enough for Exeter and the surrounding areas. Hearing aids can be serviced and new batteries can be supplied over the counter of fitted by Colin.  If you are in the East Devon area and need your hearing tested or ear wax removed then book online now.

Original story by The Hearing Review

Starkey Hearing Technologies, Eden Prairie, Minn, has released its new Fall Detection and Alert feature in Livio AI hearing aids to a limited number of hearing professionals, and plans to offer the feature to all dispensing professionals and their clients in late February, according to CTO Achin Bhowmik, PhD, in an interview with Hearing Review on Tuesday, December 18. Using integrated sensors, the Fall Detection and Alert feature is designed to automatically detect falls and send messages to as many as three contacts.

Fall detection sensors are currently implemented in all Livio AI devices as part of its standard hardware platform, and Starkey has been working on the Fall Alert feature to maximize its utility for end users prior to the system’s widespread implementation.

Falls are a massive public health problem, particularly for older adults. It’s estimated that injuries due to falls will account for $67.7 billion in public health spending by 2020, and according to the National Council on the Aging (NCOA) falls are currently responsible for an older adult being admitted to a US emergency room every 11 seconds. Additionally, people with hearing loss are particularly susceptible to falls. A Johns Hopkins study suggests that having hearing loss triples the risk of falls for people age 40 and older—and the findings hold up regardless of whether their hearing loss is moderate or severe.

How Starkey Fall Detection and Alerts work. Starkey’s new Fall Detection system is said to have several benefits over existing stand-alone medical alert systems, which are typically attached to a lanyard around the neck. “The first key advantage is that a hearing aid is almost always in your ear during your active hours, making for one less thing to carry or remember. One of the major problems with medical alert systems is getting people to wear them,” says Bhowmik. “Second, we have two fall detection sensors [in binaural fittings] for the right side and the left side, whereas most fall detection systems have only one. And the way the two sensors are spaced apart and the way in which you hold your head, we can get better and more accurate results than neck-worn sensors designed to detect falls.” 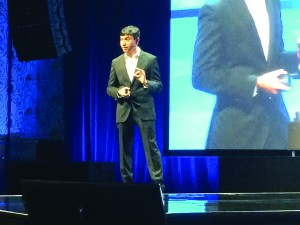 Starkey CTO Achin Bhowmik spoke about the possibility of fall detection and other sensor-based capabilities at the 2018 Starkey Expo held in January.

According to Bhowmik, part of Starkey’s recent research has revolved around what constitutes an actual fall as opposed false-positives such as quick downward movements or even accidentally dropping the hearing aid. “If you take the hearing aid off your ear and drop it on the ground, you will not get a false-positive for falling with Livio AI,” says Bhowmik. “We have been working on [eliminating false-positives] for over a year. A good AI system is only as good as the data you train the system with. In this particular case, if the left hearing aid detects a fall, it immediately checks with the right hearing aid to see if the data matches what would indicate a fall for the system. Unless it detects a fall from the hearing aids in tandem for both the right and left sides of the head, the device will eliminate those non-fall events and false-positives.” 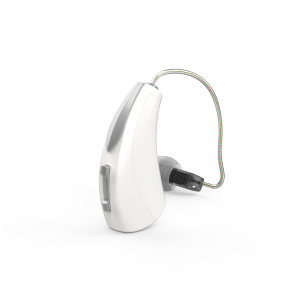 The hearing care professional will be able to activate Fall Detection and Alerts through an easy-to-use interface within the fitting software for Starkey’s Livio AI hearing aids. The user can then enter the Auto Alert contacts—up to three people who are to be alerted in the event of a fall within the Thrive Hearing App. When a fall is detected by the system, an audio prompt asks the user if they have fallen. He or she then has 60 seconds to provide an Event Cancellation and stop the outgoing Fall Alert messages from being sent to their designated contacts. If the hearing aid user has fallen and elects to send the Fall Alert message to his/her contacts, they receive confirmation when each contact has been successfully reached.

The system also allows for a Manual Alert which can be activated by simply pressing the hearing aid button, sending an alert for a fall or non-fall related event. “Maybe you didn’t fall, but instead just felt dizzy or were otherwise forced to sit down on the floor,” explains Bhowmik. “Obviously, this is not a fall. But you can still use the Manual Alert to get help when you need it. By tapping a button, you can send an automatic alert to your contacts, telling them you need assistance.”

This is just another step in the direction of making the hearing aid a multi-purpose, multi-functional device, according to Starkey.

To learn more about Starkey’s Livio AI you can visit: https://www.starkey.com/hearing-aids/technologies/livio-artificial-intelligence-hearing-aids

Phonak announced the launch of the Naída Marvel (M)
0 replies